I have decided to go pretty much chronologically with these memories. Why? I don't know. It just seemed easier to me. And, guess what, that way I won't forget what I've told you and what I haven't.

So, in the last Memory Monday post, we got married. In this post I am 4 month pregnant, back home in Alabama with my Mama. Elbert is soon going to ship back to Korea and he didn't want me alone when the baby was born. Their departure date is delayed so he wants me to come back out to San Diego for the 3 or so weeks until he leaves. He misses me.

So, yes, I pack a bag and get a train ticket.

The Mississippi River is flooded, certainly the southern most part and the tracks are covered and the train can't run that route!

The Mississippi River reached flood stage at St. Louis, Mo., on June 29 and remained above flood stage for 32 days. Friday, July 13, 1951 still stands as the single greatest day of flood destruction in this area. (info from internet)

I get on the train and it heads for Chicago. Now, I am in Alabama needing to go due west but I can't get there from here so we head straight north.

picture from internet - much like the train I was on.

In Chicago all the trains are taken, all the modern ones anyway. So, what do they send around for us to load onto? A train with a coal engine and the cars have no air-conditioning. It's July and we are having to ride all the way to California with the windows open! Oh Lordy help us. Well, I'll just pretend it's the Old West!! Hopefully, there won't be a train robber come riding up on a horse!! Oh, sorry, that just happens in the movies. 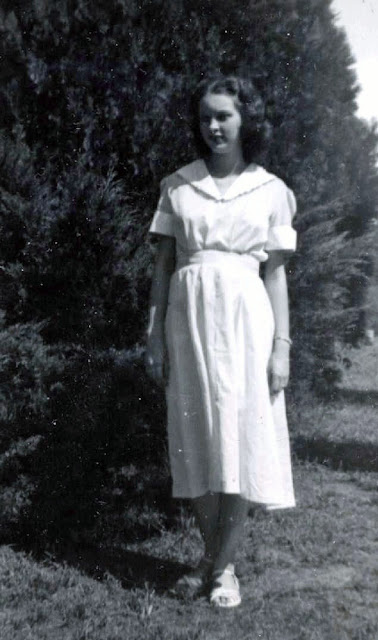 The dress I wore on the train to San Diego

We chug along, smoke and bits of cinder floating into the windows and onto the passengers. The Fourth of July arrives and we chug on, passing yards with flags flying and people cooking out. And, finally we pull into the train station in San Diego. I am tired. I am dirty.

There my sailor is!! I can't believe it. He grabs me -  dirty, smokey me. It didn't matter. We were just so happy to see each other.

I did not have a ring to give Elbert when we got married. He had one for me. You gotta remember, his Mom had just passed away and we had had little time to prepare for our wedding.

And, for those of you who wanted to know why his Dad didn't sign Elbert's marriage license... I think he was overwhelmed, having just lost his wife and now he's left with 8 kids, all underage. He had to be depressed, scared, worried. No time for his oldest son to be getting married.

Anyway, back to San Diego... I pull Elbert's new gold wedding band out of my purse and I slip it on his finger.

Engraved inside the ring was "til death do us part".
Posted by Latane Barton at 8:19 AM