As I told you all I was headed to the Eastern Shore to visit/house/dog/boy sit while the house/dog/boy owners are away. Well, some of the time I was asking myself 'why am I here?' and other times I was having such a good time. 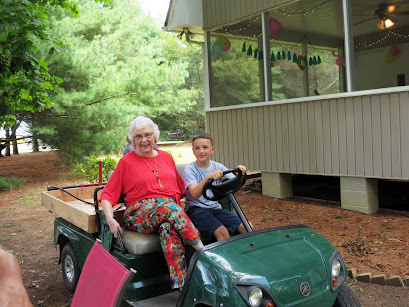 I have to tell you about something that happened one night. First let me explain where we were. The house is isolated, out in the country, lots of trees and field of crops around. Yes, they are neighbors but they don't live close and there sure aren't any street lights. You know how you can be sometimes when you are in a place you aren't familiar with.

Anyway, the great-grandson loves driving his golf cart. He's 9. He's a very responsible kid and he knows that he must not leave it outside.

It got dark. And, it started lightning, - not close but close enough. Dylan says,  'Oh no. It's gonna rain and the golf cart is out.' So his Nana tells him to go put it up (thinking that all he has to do is put it in the attached garage).

'No, you come with me, Nana' but she balks still thinking that it's such a small thing to do.

'But,' Dylan says,  'I have to take it out to the shed.' (the shed is about a block away from the house and it's dark as pitch out there and lightning to boot). They grab one of those mini flashlights and as they go out, Dylan says, 'you drive, Nana'. Nana hasn't driven a golf cart since her days as a girl scout leader... but she cranks it up and away they go, the dim lights from the cart carving a path in the darkness for them.

They get to the shed and the access is a little narrow opening between two trees. They get through that without hitting either tree. Then there's other things already in the shed so Nana is starting and stopping the cart trying to get it in place. 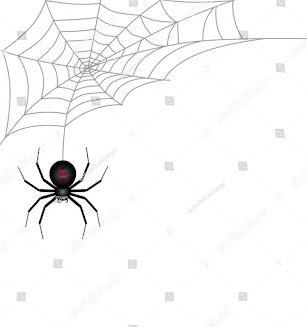 In the meantime there is a very large spiderweb right at Dylan's shoulder... with a HUGE spider in the middle of it. Nana's trying to get the golf cart in place and Dylan is flailing about, crawling over the top of her to get away from the spider. They both hop out of the cart on the same side and head to the house.

Only it's pitch black out there! And, Dylan has the tiny flashlight for them to find their way but he thinks the spider is on him so he's swinging that flashlight here and there as he is brushing himself off. They can't see where they are going so are squealing as they run.  But they finally made it back to the house, safe and sound.

I swear, we have laughed more about their little escapade!

At least Dylan knew that the golf cart had to be put up... regardless of what they ran into. We are very proud of him for being that responsible, even if he does HATE spiders.

Posted by Latane Barton at 6:48 PM

Email ThisBlogThis!Share to TwitterShare to FacebookShare to Pinterest
Labels: Adventures, Being Alone, Family

Chapters 1, 2, 3 and 4 are ready to read at summertimeinmagnolia.blogspot.com